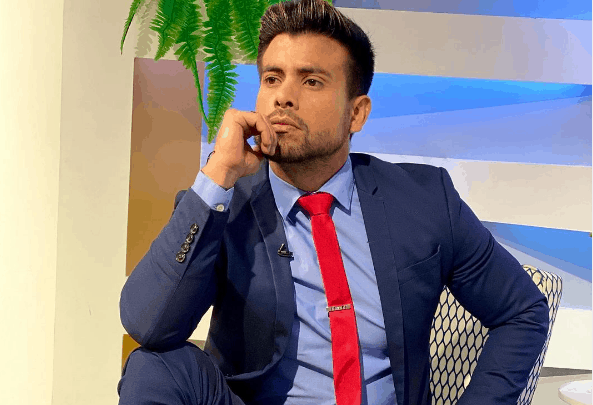 The murder of the 27-year-old actor is under investigation by the authorities. Meanwhile, several celebrities expressed their sadness and especially disbelief at the loss of Efrain Ruales.

Efrain Ruales, the popular presenter of the Ecuavisa channel, dies assassinated at 36 years old: news that thousands were made impossible to believe this January 27 in the morning, when it was confirmed that the actor also received at least 4 bullets wounds in the left side of his body while He was trying to escape from strangers on Juan Tanca Marengo Avenue, north of Guayaquil.

The Ecuadorian Prosecutor’s Office began the investigation “into the alleged murder of television presenter Efrain R., which occurred this morning in the north of Guayaquil. The first indications are collected in the place,” the agency reported.

The last minutes of Efrain Ruales’ life, captured on video

The last minutes in which Ruales was alive were captured by the security camera of the urbanization in which the training center is located and in the social media stories uploaded by Alejandra Jaramillo, his girlfriend.

Who was Efrain Ruales and what do we know about his murder? The singer and ‘influencer’ Johann Vera, born in Guayaquil and living in Florida, expressed his sadness on Instagram “we have lost an impressive human being.”

The Venezuelan singer-songwriter Nacho Mendoza shared his feelings and sent his condolences to the actor’s loved ones: “Asking for ‘justice’ is not valid when what is stolen is life, but those of us who knew Efraín must insistently demand that he be found and punished (under the respect and compliance with the laws) to those who committed the atrocious act of extinguishing the beating of such a special heart. RIP Efrain Ruales.

On the other hand, Christopher Velez, a member of CNCO, also published that all of Ecuador is in mourning. “My condolences to the family and friends of Efrain Ruales.”
For his part, the government minister, Patricio Pazmiño, pointed out in networks that the Ecuadorian National Police, through its specialized units, “has deployed all the necessary investigative actions to determine the facts of the regrettable death of Efrain Ruales.”

According to the first data that has been known about the violent event, apparently, the presenter left the gym and was presumably going home. He was attacked by unknown persons when he was traveling in his truck on Juan Tanca Marengo Avenue. Agents of the National Directorate of Crimes against Life, Violent Deaths and Disappearances (Dinased) specified that the presenter received at least four gunshot wounds.

The Government of the South American country offered a reward of $ 50,000 to anyone who provides important information to clarify the murder of the television presenter that occurred this Wednesday. The authorities believe that it could be a commissioned crime since all the belongings of the deceased remained in his vehicle after the event.

Video: The moment Efrain Ruales is shot in the north of Guayaquil

The general of the National Police and commander of Zone 8, César Zapata, told the press at the scene that Ruales was shot from a vehicle.

Police cordoned off the area and collect data before offering more details about what happened. Ruales was one of the well-known faces of the Ecuavisa channel, where he entertained programs in the morning and had also acted in the Ecuadorian series.

Efrain Ruales announced in a video that he had received threats

Ruales hosted a program on the Ecuavisa network. He also had a program on social networks in which he had announced that he had received threats after raising issues of corruption cases. “Through a call, they tell me: be careful with the messages I sent on Sundays about corruption cases,” Ruales shared, referring to the threats he had received for giving his opinions on scandals over overpricing of medical supplies during the pandemic.

Above you can see the last video that Ruales published, in which he talks about corruption in his country.

They had completed a year of relationship a few days ago and in the near future you could see the marriage, said by both. Their love was public, but at the same time private because they exposed only a part of what they lived despite spending a lot of time together.