Last week, and after intense rumors that Marlene Favela had separated from her husband, Australian soap opera star George Seely confirmed that she and her husband had taken different directions.

And although at the time the 43-year-old Mexican did not reveal details about the breakup and said that she would not refer to that issue again, a new chapter is prowling in the media and on social networks, after an alleged friend of the husband of Favela will ensure that the man was unfaithful to his wife.

After actress Marlene Favela announced her separation from businessman George Seely, just a few months after the birth of her daughter Bella, a Mexican magazine unveiled the alleged reasons for the couple’s breakup.

This was revealed by TVnotas magazine , which quoted a woman close to the businessman, whose identity was kept anonymous, and who in an interview said that the actress allegedly discovered the father of her little daughter Bella infraganti.

This was revealed by TVnotas magazine , which quoted a woman close to the businessman, whose identity was kept anonymous, and who in an interview said that the actress allegedly discovered the father of her little daughter Bella infraganti.

“A friend I have in common with George told me that he was unfaithful to her, and the worst thing is that she found him in bed with another ,” the woman told the aforementioned publication, adding that before the protagonist of Wild Cat to marry the Australian, she had already been warned of his alleged unfaithful personality.

The television program A New Day , echoed the allegations and added that the event occurred in Los Angeles and that the worst thing of all was that the actress surprised her husband in December, at a time when she was in recovery after giving give birth to her baby girl.

In the Telemundo program, it was also mentioned that Seely has problems with sex addiction, for which he would have told his wife that he could not contain himself.

So far, neither Favela nor her ex-husband have referred to the alleged revelations presented by the Mexican publication.

After announcing their separation, the actress mentioned that she was separating from her partner, after almost three years of marriage.

“I want to say yes, I am separated. I did ask for a divorce and I want to share this with you because I don’t want to keep inventing things. When I decided to get married I did it very aware of the man I was marrying and the decision I was making, I wanted to start my own family, I had waited for a long time because I wanted to do it when I was very full in all aspects of my life Favela said on her Facebook, denying that the differences with her husband were due to work.

“I want you to know that my relationship did not end because I wanted to return to the middle of the show, I want to clarify it. I would never have put my family at risk for any job, for anything that had to do or that my husband did not think so, so I wanted to clarify that, “added the star of the melodramas.

“I married a good man, I married a wonderful man, with an extraordinary family to whom I have affection and respect, his dad rest in peace, his beautiful mother, my brothers-in-law and nephews who good now they are Bella’s cousins, a family that welcomed me with so much affection and to whom I have them in my heart and with deep respect, ”said the actress. 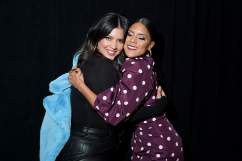 “In life, things that are perfect one day stop being perfect, one day things change and you have to try to take as positive a situation as possible. I will never speak ill of my daughter’s father, he is a man I respect and he is a man I loved very much, and I married him. So they will never hear my mouth speak badly of this person, I even want my daughter to grow up loving her parents equally, “concluded the Wild Cat.